Children’s acts of cruelty to animals used to be excused as “Boys will be boys” or “It was only a cat.” Today we now understand that children’s committing or witnessing animal abuse can be an important predictor of current or future antisocial and aggressive acts. Children showing these behaviors, without intervention, are at risk for enduring disorders in conduct and mental health. Children learn by example: we can no longer excuse these acts as trivial or as a normal part of growing up.

The Link between child and animal abuse is well established: the first child abuse cases were prosecuted by animal protection agencies as early as 1874. Today, extensive research confirms strong correlations between child maltreatment and animal abuse. Childhood animal cruelty is one of the earliest symptoms of conduct disorder, and may start to show up as young as 6-½ years of age.

Animal abuse occurs in as many as 88% of homes where children are physically abused. More than a third of these children take out the aggression that has been directed at them upon animals. In some neighborhoods, 31% of youths have attended a dog fight. Children who bully others — or who have been bullied — are more likely to abuse animals.

Not all children who hurt animals become violent adults. But child and animal welfare organizations are responding to The Link to break the cycles of violence enveloping families. Child protection caseworkers are being trained to recognize animal abuse and neglect as a significant warning sign of children who may be at risk of physical, emotional and sexual neglect. 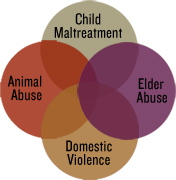 The National Link Coalition has extensive resources on the Link between animal abuse and child maltreatment. For a comprehensive bibliography of research on this topic, click here.